Did You Know?
Bible Q&A > Others
Font size :

I am taught that the history of the Israelites was written to teach us. Israel was destroyed by Rome in AD 70. The people of Israel were very proud of being God’s chosen people. Yet, why and how were they destroyed? And what lesson does this history give us today?
It was around AD 30. The religious leaders of Israel accused Jesus―God who came to this earth in human form for the salvation of mankind―and brought Him before Pilate, the governor of Judea. The Jews, who were gathered at the place of judgment, raised their voices and kept shouting, "Crucify him! Crucify him!"

Pilate found Jesus innocent of all charges, but he was afraid that the crowd might riot if he did not crucify Him. So he took some water, washed his hands in front of the crowd, and said, "I am innocent of this man''s blood. It is your responsibility!"

The shout of the Jews, who had crucified Jesus, boomeranged on them 40 years later.

After the Crucifixion, there were rising complaints among the Jews because of continuous oppression by Rome. A mob arose in Jerusalem, and the riot spread throughout Judah rapidly. Rome hurriedly sent its army to put down the riot, but the Roman army faced fierce resistance and had to withdraw.

Surprised to see the situation getting worse, Rome appointed General Vespasian, who was very experienced in battle, as a new commander to suppress the Jewish revolt. Vespasian marched into Jerusalem at the head of an army of 60,000 men, and in AD 68 he isolated Jerusalem and was ready to begin a siege.

It was a situation of sitting on a powder keg. All of a sudden, however, the Roman army retreated from Jerusalem. The Jews in the city of Jerusalem thought that the Roman soldiers ran away by the help of Jehovah. Elated by their victory in the war, they danced and shouted for joy, raising their shields high. The whole city of Jerusalem was in a festive mood.

The reason why General Vespasian suddenly retreated was because of Emperor Nero''s sudden and unexpected suicide. Vespasian was raised to the throne, and he was officially declared emperor of Rome in AD 70. When he settled down the political upheaval in Rome, he put his son Titus in charge of the entire military operation against Jerusalem. Under an elaborate plan, Titus laid siege to Jerusalem with a force of 80,000 men.

Jerusalem was naturally a well-fortified city, built on a steep sided mountain ridge; it had three layers of walls around it, which were thick for protection from attack. There was also a waterway that King Hezekiah had built in case of an Assyrian attack, through which the Gihon Spring flowed into the city, so that the people in the city would survive even in case of being isolated from the outside world.

The Roman army blocked the waterway of Gihon first, and completely cut off the food supply route to Jerusalem, and closed off all entry and exit to the city.

As the isolation of Jerusalem lasted long, its inhabitants were starving to death. The roofs were crowded with exhausted women and children, and the streets were full of old people. The young people wandered in the streets like ghosts with their bones protruding from their faces, and they fell down here and there with exhaustion, and died in pain.

Nobody shed tears or mourned over these deaths. Even their family members had no strength to bury their dead. Even if anyone had strength, the dead were so many that they had to give up burying them. In silence of the horrible deaths, the mob became more and more violent. They came into houses and stole anything to eat, even searching through the dead.

Suffering from extreme hunger, people began to eat whatever they could get. They chewed the belts, boots and leather from shields, and also rummaged through garbage in search of food, which even animals did not touch.
However, it was nothing. Their severe hunger pains brought forth a terrible and cruel thing; some women even ate their babies to stay alive.

Everything that happened to Jerusalem besieged by the Roman army had already been prophesied in the Bible.

Dt 28:52-57 They will lay siege to all the cities throughout your land until the high fortified walls in which you trust fall down. They will besiege all the cities throughout the land the LORD your God is giving you. Because of the suffering that your enemy will inflict on you during the siege, you will eat the fruit of the womb, the flesh of the sons and daughters the LORD your God has given you. . . .


The fall of Jerusalem in AD 70

Titus launched intense and continuous attacks on Jerusalem. The Jews who were alive in the city fought back against Rome, being exhausted from hunger, but finally they were killed by the Roman army. The walls, the temple and everything else in the city burned down, and the streets were full of dead bodies. The blood

flowing from the dead was enough to put out the flames.

On September 8, AD 70, Jerusalem finally fell to Rome. The number of Jewish captives taken during the entire war amounted to ninety-seven thousand and the estimated death toll during the siege reached about 1.1 million.

Jerusalem was completely and thoroughly destroyed even to the extent that it was hard to believe there had once lived people in that city. That was the end of the city which had once risen to fame. 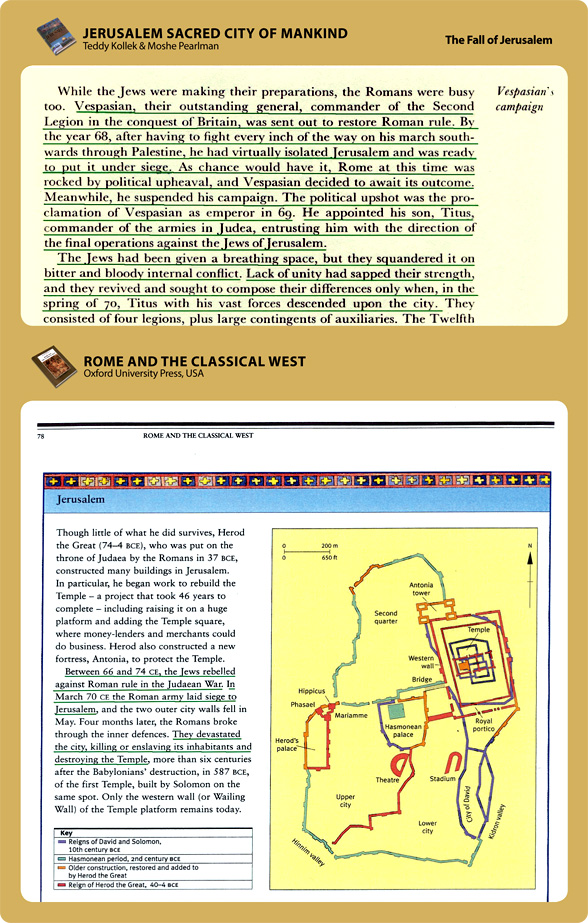 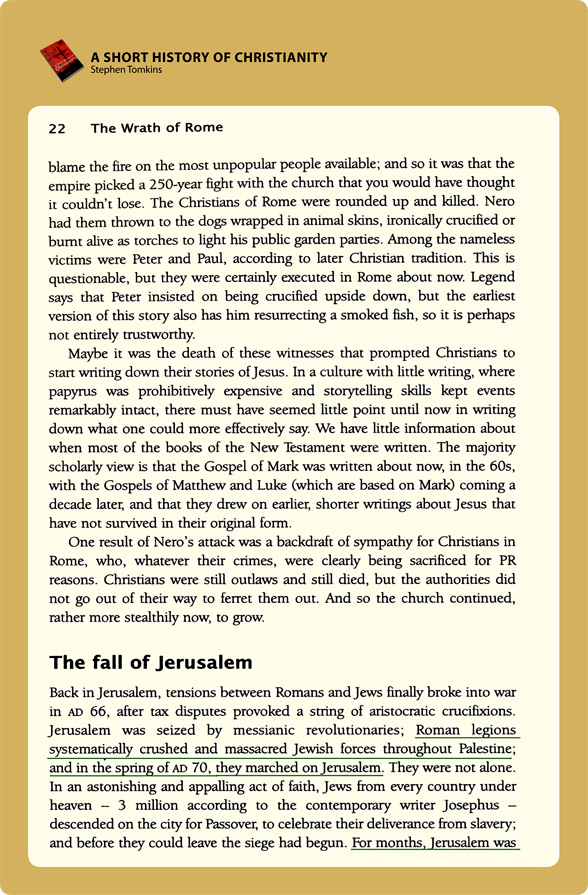 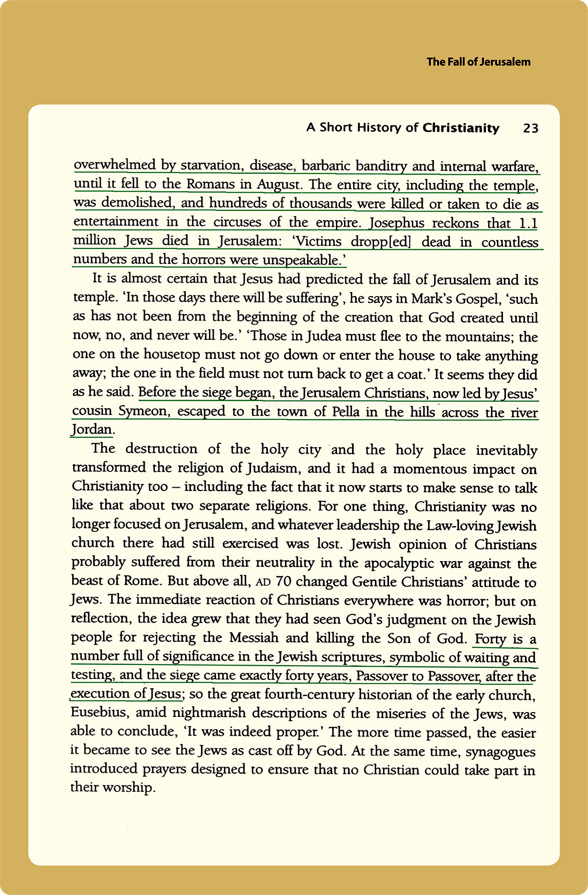 However, not everyone in the city faced the horrible destruction. While the Jews were intoxicated with the joy of victory due to the withdrawal of Vespasian''s army, all the Christians in Jerusalem came out of the city.

Lk 21:20-22 "When you see Jerusalem being surrounded by armies, you will know that its desolation is near. Then let those who are in Judea flee to the mountains, let those in the city get out, and let those in the country not enter the city. For this is the time of punishment in fulfillment of all that has been written."

40 years had passed since Jesus'' ascension. Meanwhile, people forgot about Jesus and they did not remember what He had said. Only in the hearts of Christians were alive Jesus'' words like an undying lamp. So, when Jerusalem was surrounded by the Roman army in AD 68, Christians knew that it was time to move according to the prophecy and fled to the town of Pella. On the day of Jerusalem''s fall, Christians were able to receive the enormous blessing of being saved from destruction by believing the words of Christ.

This history gives a lesson to us who are living in this age.

Lk 21:10-11 Then he said to them: "Nation will rise against nation, and kingdom against kingdom. There will be great earthquakes, famines and pestilences in various places, and fearful events and great signs from heaven."

Now we continually hear the news about disasters, wars and accidents occurring throughout the global village. These are also the signs that Jesus foretold. The signs occurring today tell us that now is the time to flee to Zion.

Jer 4:5-6 "Announce in Judah and proclaim in Jerusalem and say: ‘Sound the trumpet throughout the land!'' Cry aloud and say: ‘Gather together! Let us flee to the fortified cities!'' Raise the signal to go to Zion! Flee for safety without delay! For I am bringing disaster from the north, even terrible destruction."

Zion is the place where God''s appointed feasts are celebrated (Isa 33:20; Heb 12:22). God''s feasts celebrated in Zion in New Testament times are the feasts of the new covenant—the seven feasts in three times, which begin with the Passover (at twilight on the fourteenth day of the first month of the sacred calendar). The Passover contains God''s promise to let any and every disaster pass over us (Ex 12:11-14). God eagerly wants all people to be saved by keeping the Passover, the covenant of life, in Zion.

Lk 22:15, 19-20 And he said to them, "I have eagerly desired to eat this Passover with you before I suffer. . . ." And he took bread, gave thanks and broke it, and gave it to them, saying, "This is my body given for you; do this in remembrance of me." In the same way, after the supper he took the cup [wine], saying, "This cup [wine] is the new covenant in my blood, which is poured out for you."

In AD 70, those who despised the words of Jesus suffered such a painful and horrible death when Jerusalem was being destroyed. The Jews who failed to recognize Christ and ignored His words and the Christians of the early Church—they ended up in totally different consequences. Taking a lesson from them, we must pay attention to the prophecies of God and follow them.

Looking at the reality of this present time, let us gather together in Zion without delay. Since we have been called to be children of Zion earlier than others, we should blow the trumpet of salvation aloud towards all nations. By proclaiming the New Covenant Passover with a loud voice, we must let all people throughout the world flee to Zion, a fortified city, without delay. This is the prophetic mission we have to do now.

No part of this website may be reproduced, stored in a retrieval system, or transmitted in any form or by any means(printed, written, photocopied,
visual electronic, audio, or otherwise) without the prior written consent of the Church of God, World Mission Society.
Any such action will be in direct violation of copyright laws.